Star Wars vehicles are very important to me.

If I’m talking about Star Wars toys I’m probably going to mention that the starfighters, cloud cars, assorted tanks, and the odd space freighter are critical to any toy line focused on The Galaxy.

Note: Ever since I watched the Solo special features and heard Ron Howard refer to Star Wars as simply “The Galaxy” I have thought it was absolutely wonderful. Pardon me while I obnoxiously co-opt his term of endearment.

The 3.75” Star Wars line has gone through a lot of changes over the past decade and the last few years, specifically, have seen dramatic changes in how Hasbro releases vehicles. Toy production costs have skyrocketed, so the days of getting an acceptably scaled starship for under forty bucks are gone.

Ten years ago you could purchase a (reasonably) accurately scaled Jedi Starfighter with a functioning cockpit, spring-loaded wings and missiles, a removable droid piece, landing gear, and other bells and whistles for $19.99. Since then, as production prices have risen, Hasbro has tried various methods of getting vehicles to the public – scaled-down versions, simplified models, (much) cheaper plastics, less deco, and big hunks of rotocast plastic that don’t even interact with figures.

None of these were for me and I have had to sort of accept that 3.75” scale vehicles were no longer part of my collecting habits.

Fortunately I have an eleven-year-old son who likes Star Wars, so I’ve been keeping tabs on things through his collection. Hasbro has done some interesting things since The Force Awakens and I’ve actually picked up a few items here and there (on clearance).

This past year, though, Hasbro has shown a new interest in getting collectors like me back on board.

You all probably know about HasLab and the forthcoming Sail Barge (good lord it’s less than two months from shipping and I have no idea where I’m gonna put that enormous sonofabitch), but we also got a special treat in the form of today’s subject – a Vintage Collection Imperial tank from Rogue One.

If you don’t know, Hasbro’s Vintage Collection is a line meant to appeal to collectors like me. It uses packaging based on the looks of the original Kenner line, which is a huge draw. Beyond that, the toys themselves have more articulation and deco than the current basic 3.75” releases. While I enjoy the look of the packaging, I open everything, so the quality of the toys is much more important to me. They could put a super articulated figure with great deco in a Mylar bag with cardboard stapled to the top and I’d buy it.

This Imperial vehicle – from a key scene in Rogue One: A Star Wars Story – was the first modern Vintage Collection vehicle release. There is currently also a Walmart exclusive TIE Fighter that’s less appealing to me because I already own some fine TIE Fighters and don’t want to pay eighty bucks for a slightly different one.

I’m a big fan of that scene and this tank and when Hasbro first shared pictures of it (at Toy Fair, I think) I was excited. But I also knew that I probably wouldn’t buy it because it would probably cost way more than I was willing to spend. Once it hit retail that turned out to be the case, so I resigned myself to missing out if the price didn’t drop.

Yes – I am aware that waiting for things I want to drop in price probably reduces the likelihood that toy companies will produce more things I want in the future. But I’m at a point where my idea of value has been left behind by inflation. If something is too expensive for me anyway, I’m okay with it going away.

Of course, there’s the whole other issue of those One:12 figures I love so much costing as much as this tank, but that’s a conundrum for another day.

Anyway, eyeballing Amazon for dropping prices on toys I want, but not badly enough, has become a habit. Much to my surprise this beautiful tank dropped to forty bucks just before Christmas, so I ordered one. Is it worth forty or maybe even the original eighty? Read on and find out!

All of that extra text sure is ugly.

Otherwise this is almost exactly like the Kenner boxes of my youth, right down to the logo on the bottom left of the box!

Hasbro rarely does any kind of upselling for other products in their Star Wars line – gone are the delightful mini catalogs that featured the year’s releases or even cardbacks depicting full waves of figures. Given that, it’s nice to see toys other than what’s in the box, although it could leave some potential byers confused as to why this tank doesn’t come with any figures, not even the pilot (sold separately).

I like the feature panels on the side, complete with little descriptions, though it’s annoying that the print has to be so small to accommodate multiple non-English languages.

Inside there’s a standard cardboard tray with everything secured by tape and polybags. I thoroughly enjoyed sliding that tray out and the wave of nostalgia that came with it. I don’t often get to open vehicles like this anymore and I miss the thrill of seeing all of the parts that will be assembled into an awesome final product. To be honest, too much of the tank was assembled for my taste. I would’ve loved to have had to snap on some of the panels and maybe apply some labels. 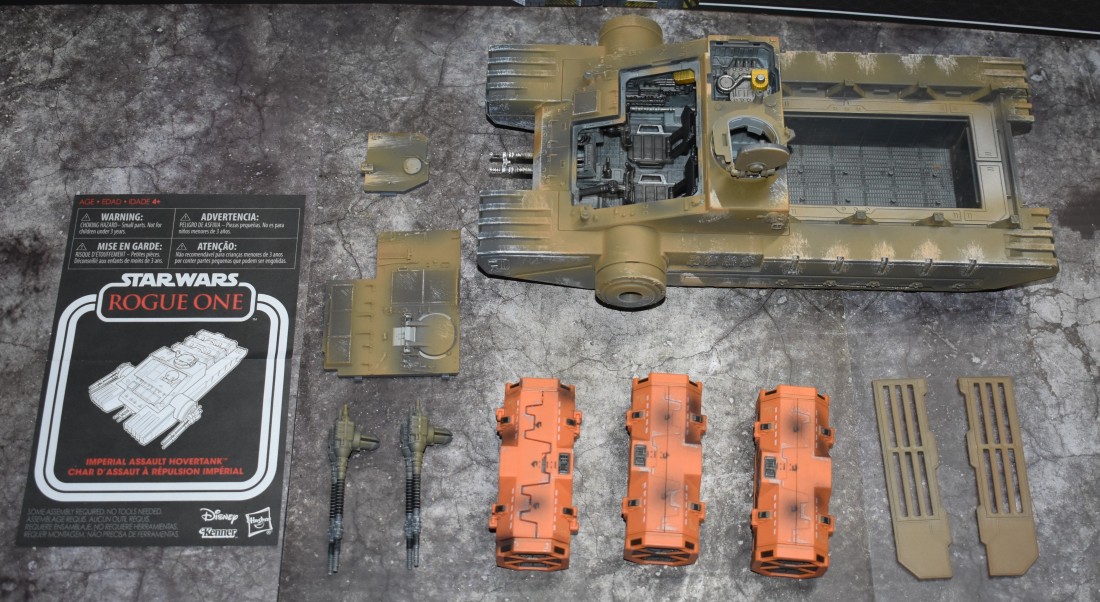 I have seen this referred to as a “hovertank”, which is not accurate because it has treads. Functioning treads, even! 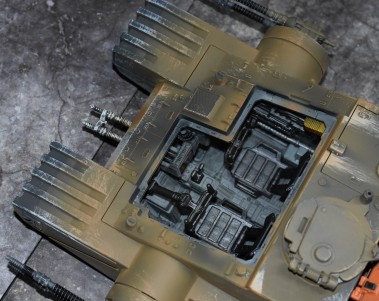 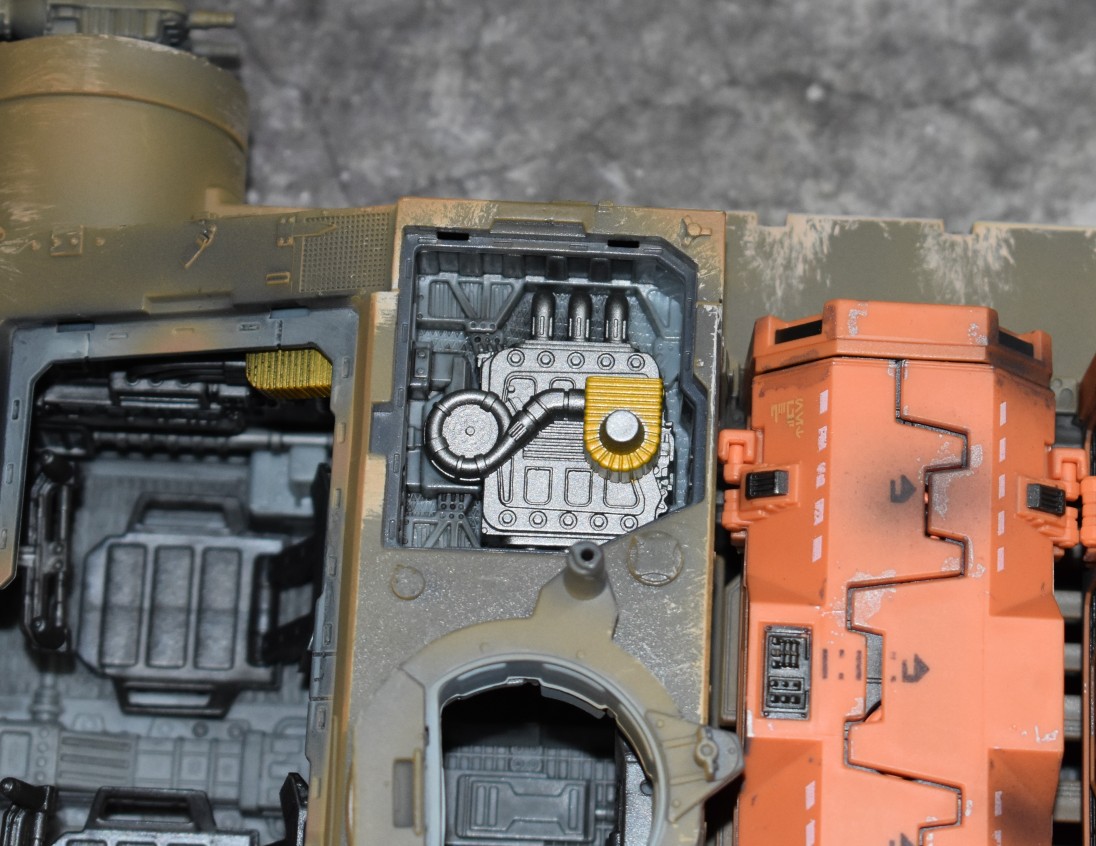 The vehicle itself is made of nice, sturdy plastic that feels a lot better than some of the cheap stuff being used today. There’s a gorgeously detailed cockpit that could uses some paint, but still looks nice. When the panel is removed there’s room for two figures, but that panel isn’t going back on. This is one of those fakey-scaled deals where there’s play value, but it is not accurate to the movie. And that’s okay. If the panel was on you couldn’t see the pilots anyway.

Fortunately there’s a spot just behind and above the cockpit where a figure can matter. A circular hatch of the kind you see on basically every decent tank toy opens up and allows a Stormtrooper (or whatever) to stand in a firing/lookout position. It’s neat and fun and opening little circular hatches on tanks is one of the great toy experiences of all time.

Another great experience is removing panels. Hasbro’s GI Joe: A Real American Hero line remains king of this particular feature. From the beginning those toys would have two or three panels each that could be removed to reveal the innards of the vehicle, storage for accessories, or sometimes both in one spot! This tank only has one such panel, but it’s a great addition with a nice-looking painted gizmo inside. 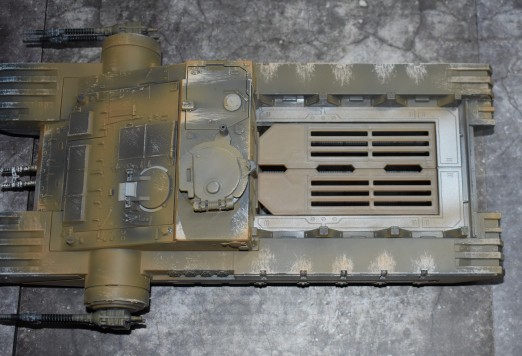 While this thing is called a tank, it’s really an armored cargo transport. That just doesn’t sound as cool as “combat assault tank”. The rear portion is designed to accommodate the included cargo pods, not-included troops, or any other not-included items you can think of.

The back is basically built like an armored pick-up truck. There are foot pegs in the bottom of the bed and what’s basically a bench around the sides, so you could probably fit six or so figures back there. I haven’t tried yet because removing figures from my Star Wars shelves is a potentially exhausting process that I am not ready for at this time of year.

For hauling other assorted items – maybe speeder bikes or Mini-Rigs? – there are two slotted panels that cover the recessed portion of the bed. These feel and look a bit cheap and aren’t my favorite part of the toy. 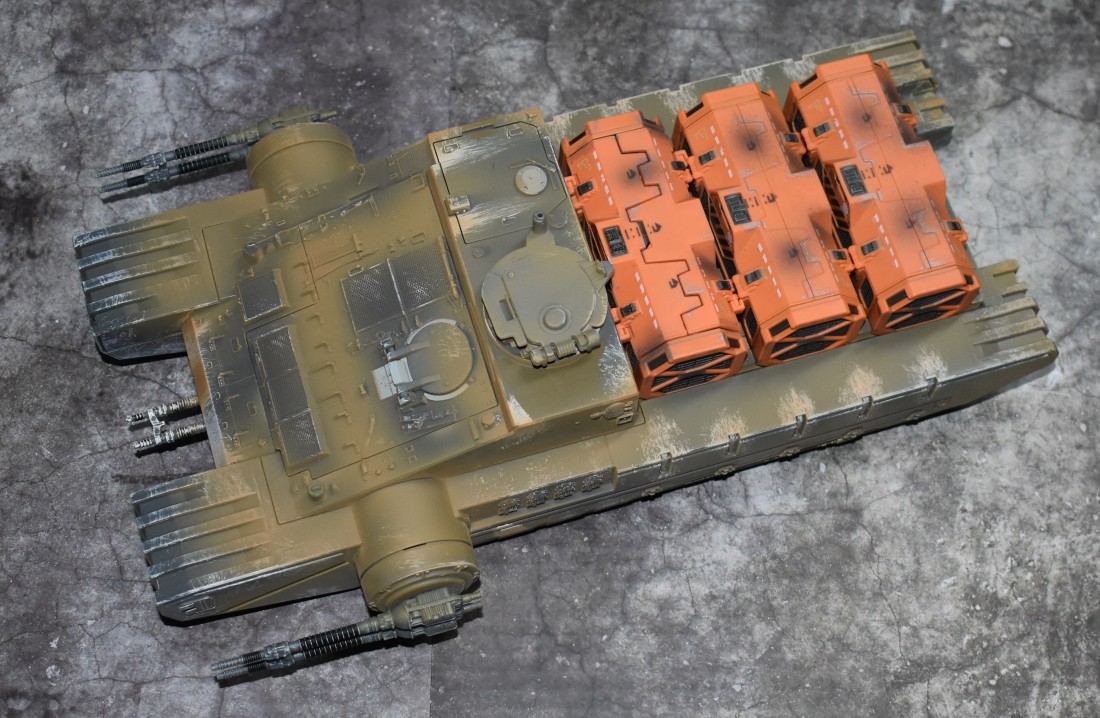 The included cargo pods fit snugly into the “V” shaped slots on either side of the bed. The two panels aren’t necessary for these, but you might as well leave them on.

As I mentioned above the tank has functioning treads. They’re nicely sculpted rubber pieces fit over rolling wheels. They look and feel great, but don’t move all that well. Something about how the treads fit over the wheels is a bit off, so you have to apply some pressure to get it to roll. This isn’t a big deal for me, as once I get a chance this will be going on the shelf, rarely to roll again.

Another moving part is the double-barreled blaster affixed between the forward mandibles. It’s got a very well-defined sculpt and beautifully painted wear. It swivels back and forth nicely. 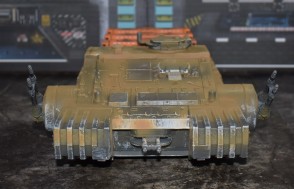 Speaking of paint, if you’re looking at the pictures I hope you’re admiring the phenomenal paint job on this toy. I often mourn the loss of the kinds of paint apps we had in the mid-to-late 2000s, but even back then I don’t think we got anything this nice. Hasbro really went above and beyond with the wear and grime on this toy. It might be one of the best-looking paint jobs I’ve ever seen on an item like this. Even the treads have paint on them! 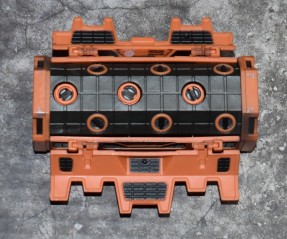 The tank includes three cargo pods and two mounted cannons, in addition to the removable panels mentioned above.

The cannons plug into the sides of the vehicle and rotate 360°. Or until you hit the ground, I guess. Their sculpts are just as defined as the rest of the toy, which is an odd thing to say, but there really is a different level of quality here. I can’t say anything bad about Hasbro’s basic releases, but when compared to something like this they just look a bit softer and cheaper.

There are three cargo pods, but one of them is a little niftier than the other two.

All three are sculpted and painted beautifully and fit perfectly into place on the tank. One of them actually opens up to reveal three removable canisters, which themselves have an almost unnecessary level of detail.

This is an absolutely wonderful item that adds more value to the overall product than you’d realize.

After being disappointed by Star Wars vehicles for the last several years, all I see when I look at this Assault Tank are the corners Hasbro could have cut but didn’t. This is an absolutely gorgeous toy that – much to my surprise – is one of the best Hasbro has ever released. Believe me – I have shelves full of the last twenty years of Star Wars vehicles, as well as more than a fleet of starships hanging from my ceiling. There are some amazing pieces in my collection. But even when compared to gems like the B-Wing and the Republic Gunship, this tank stands out.

Is it worth eighty bucks?

By the toy standards of today, probably. As of this writing you can find it for sixty, and I’d say definitely grab one of these for that if you can. And don’t forget to snag a couple of the Vintage Collection Tank Drivers to go with it. It’s a good figure.