The newest entry in the legendary Halloween franchise comes home tomorrow, so I thought today would be the perfect time to review NECA’s newest – and long-awaited – Michael Myers figure.

After years of near-constant Freddys and Jasons, and even a few Chuckys, the absence of the OG slasher from action figure aisles was conspicuous. While Mezco’s One:12 Myers (from the original film) just barely beat this one to market, off the top of my head I think the last one we got was in the box set with Doctor Loomis and the porch diorama. That’s the one that’s on my shelf, anyway. Sadly the diorama did not survive a move.

Out of all of NECA’s figures, that one has actually aged rather well. One of the advantages Michael has is that he mostly looks the same and there’s not a whole lot of updating to be done at an action figure scale. Of course, as far as being a renewable license with lots of merchandising opportunities, this is not an advantage. I’m sure NECA will squeeze a 1978 Michael out of this figure and might even be able to convince us a couple more are warranted, but I can’t see them doing one for every movie in the same way that they have with Freddy and Jason.

Note: We already know that NECA is releasing a Laurie Strode to go with this Michael and it wouldn’t surprise me one bit if they pack a slightly different version of Myers in, too. I hope they don’t, but they have a history of such tactics.

After loving the new Halloween I couldn’t wait to get my hands on some merchandise. NECA’s figure took a little longer than I expected to arrive, but now that it’s here, was it worth the wait? Read on and find out! 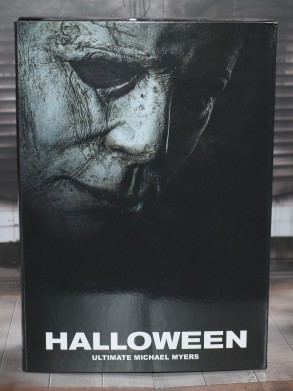 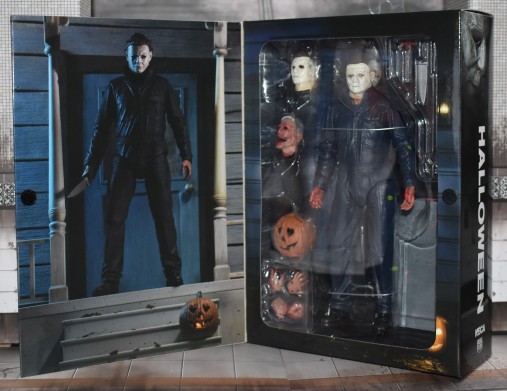 NECA’s “Ultimate” boxes are whatever they need to be. While the paneled window box is the standard, the sizes and style  vary according to the needs of the individual figure.

This is a big one due to Michael’s size and the number of accessories. The panel – secured by a Velcro dot – opens to reveal everything packed inside. The inner tray is well organized and designed so that nothing was warped out of the box.

The front graphic is the close-up of the Shape’s mask from the poster, the back features a number of shots of the figure in action. Usually I would prefer stills of the character from the movie itself, but NECA puts so much work into these kinds of pictures that I prefer product shots in this instance.

The figure and accessories unpack easily and could just as easily be put back in if you so desire. I don’t save these boxes, but I could totally understand someone that does. 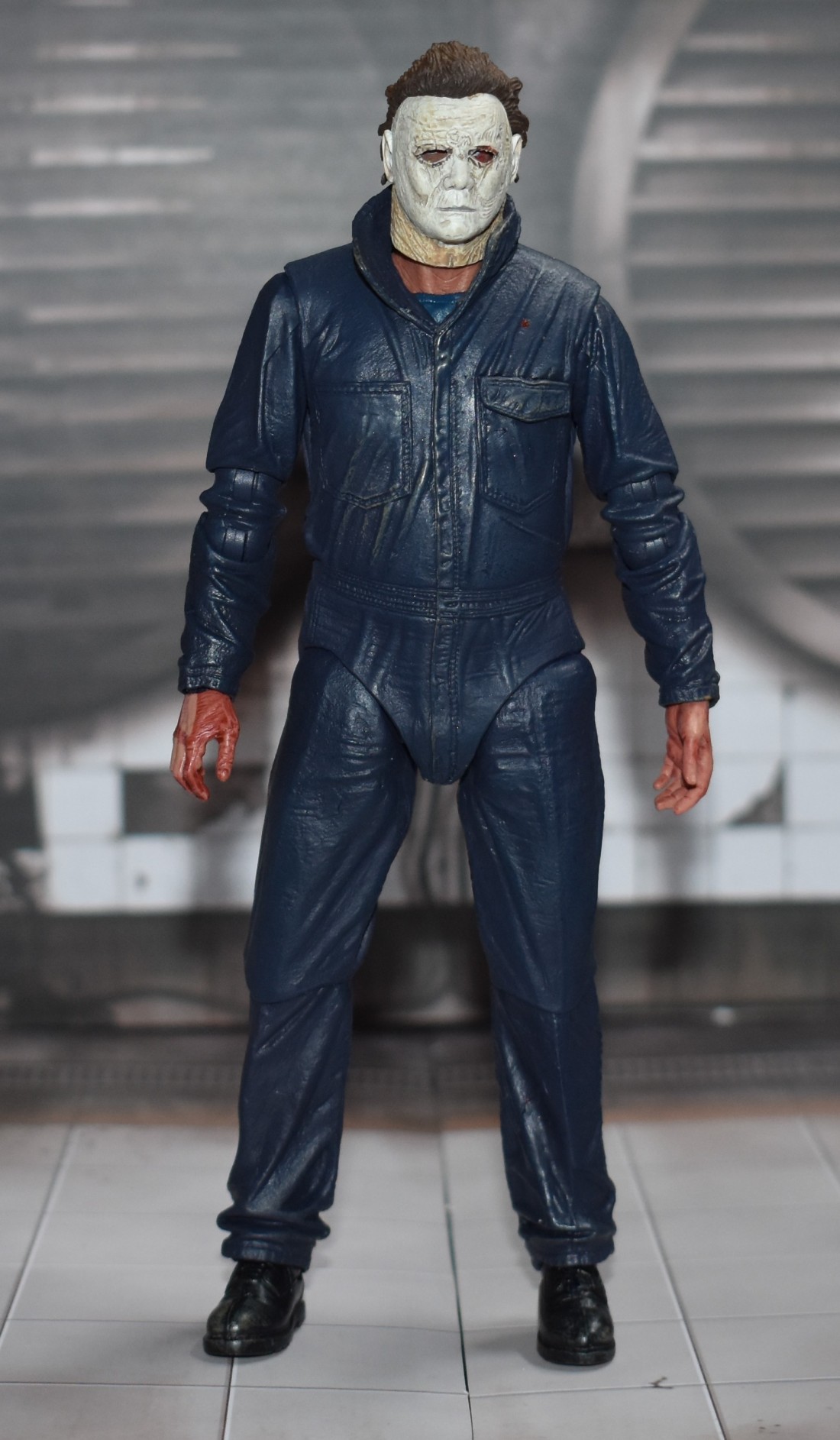 While that older Michael Myers I own looks great, NECA was never going to have a hard time improving on it. The few joints it has are cut joints and it pretty much only looks good in one pose.

Of course, this isn’t the 1978 Shape and there are some differences; enough that I’m certain we’ll see an update to that look.

As far as representing the 2018 version, this figure does the job. The mask impressed the heck out of me. When I picture any given Michael Myers mask, there are slight differences. But at this scale pretty much just a blank white mask with brown hair gets the job done. This one has tons of sculpted detail to show the wear of 40 years, but also has some tremendous paint. There are several colors in different places to show grime and deterioration. The hair on top is well defined and has a disheveled appearance, as well as its own set of colors.

Under the mask… you can just see those eyes.

The figure sports the Shape’s trademark coveralls, with some exposed flesh and a slightly different colored t-shirt just barely visible at the collar. Speaking of the collar, I love the way it’s shaped. It stands up, but is just a bit off-kilter.

Michael’s hands are covered in blood – a disturbing touch.

The coveralls are as loaded with detail as the mask. There are pockets, seams, and stitching, as well as folds in the fabric. It all comes together to give the figure a great profile and a very dynamic look. Let’s face it – Michael is usually standing or stabbing, so it doesn’t hurt to give his clothes a little extra character.

The figure sports some of the best articulation NECA has done in its straight-up horror line. The head has better-than-average poseability and the body has the now-standard hips and shoulders with plenty of range. All of that works well and my figure doesn’t have any problem joints.

Where this one stands out is in the wrists, elbows, and ankles.

The wrists are pegs on hinges, so you get swivels and pivots. This is a fantastic update to NECA’s standard pegs. The elbows are double-jointed, which isn’t a first for NECA, but constitutes a welcome addition to this figure.

The big ones for me are the ankles. I’ve been complaining about the ankles and feet on NECA figures for as long as I’ve been collecting NECA figures. For decades NECA would stick rubber feet on pegs; typically when it was a trouser/shoe situation. This led to dozens of figures that, over time, would develop the dreaded shelf lean and eventually just fall over, even if they were on stands.

It was a garbage way to design figures and to this day I don’t understand why they did it that way.

I don’t remember the first figure to utilize actual articulation, but Dutch from the Predator series and the Colonial Marines from Aliens all had fantastic designs. And now, for what I think is the first time in the regular horror line, Michael Myers has this articulation. It’s somewhat limited by the cuffs of his overalls, but it’s still excellent. Much like Marvel Legends, the ankle has a hinge with a peg and the foot is a separate piece mounted on that peg. It allows for many posing options and is far more stable over time than the rubber foot-on-a-peg.

The hammer is ridiculously detailed. I don’t know why I’m starting here, but I am. The head is painted silver and covered in blood. The handle has a wood grain sculpt with a wash of paint to bring out the fine detail. It fits in the appropriate hand well and stays put.

I think the alternate Michael head is from early in the movie when he first gets the mask back. The hair is more smoothed-down. I could be wrong, though, because there’s a conspicuous and very intentional drop of blood painted on the neck of the extra head that suggests it might be the later mask. I’ll be more familiar with such details after watching the movie again at home.

The knife looks great. NECA has made a lot of them and they know what they’re doing at this point. This one fits in Michael’s big, bloody hand and looks terrifying.

All of the hands sport specific blood decos and are meant for different things. My favorite is the one missing the pinky and ring fingers – a brutal wounding that happens late in the film and is part of one of my favorite shots of the Shape ever. 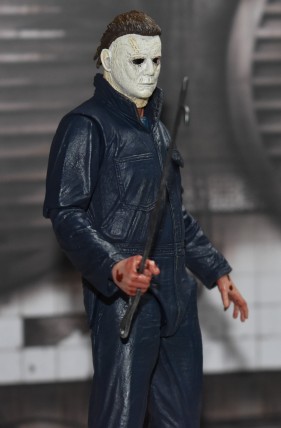 The fireplace poker, while superbly done, is somehow the least exciting of the accessories. I think it’s just because it lacks the visual power of the other items. It’s almost delicate and fancy.

The headstone, despite being basically a flat piece of plastic, is very nice. Thanks to the sculpt and paint it has weight and depth and is a great addition to a solid selection of accessories. 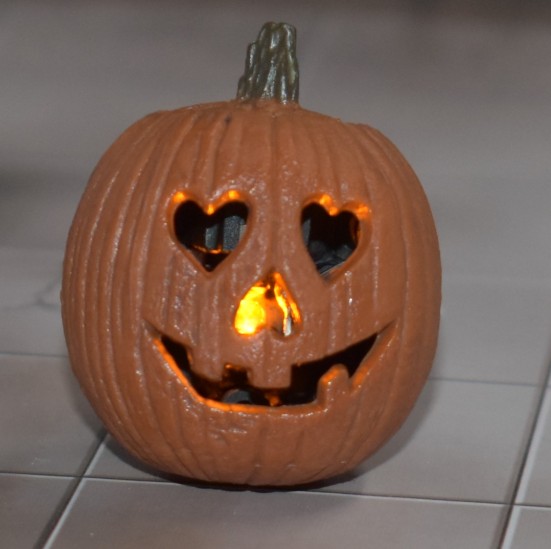 Vicky’s jack-o-lantern is one of the best accessories NECA has ever produced. Not only is it sculpted and painted beautifully – with a nice gloss that looks much more realistic than some of NECA’s older, flat releases – it light up! But it doesn’t just light up, it flickers as though it has an actual candle inside. It looks fantastic and makes a great figure set remarkable. 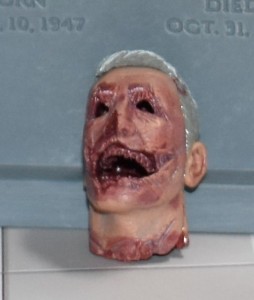 Finally, there’s Officer Francis’ severed head. I’m going to continue with the not-really-hyperbole here and say that this is the sickest thing NECA has ever released, even over the xenomorph with the articulated penis. It’s brutal and gory and shocking and excellent.

In this age of multiple “Ultimate” versions of certain characters it’s hard for me to call any one figure a must-have. As I mentioned above, I think there’s a good possibility we’re going to see versions of Michael very similar to this one in other sets.

However, we might not see the Francis-o-lantern or Vicky’s jack-o-lantern again, and those are fantastic items. If you can live with the thought of shelling out for this figure now knowing that you might end up with another one down the road, I’d say go for it just to be sure you get those remarkable accessories and the best Michael Myers figure I’ve ever owned.