Yeah, I’m a little late getting this up. I had to post my “best of 2018” stuff before Dave fired me, but I’m finally going to talk about Days of the Dead. This was my third year attending, and it’s always a blast. If you haven’t checked it out yet I highly advise you to hit one up in a city near you.

Days of the Dead is a smaller horror convention, but it’s growing. The first year I went I got to see most of the cast of The Thing (which is my favorite horror movie ever). Last year I saw Malcolm McDowell and Ray Wise. This year I was looking forward to seeing a Hellraiser Cenobite reunion, a Night of the Demons panel, and Laurie’s friends from the original Halloween movie. Most of that was not to be. Hellraiser and Night of the Demons were on Friday night. I couldn’t get down there in time after work to make it for anything Friday night. I’d taken most of the week off to deal with family stuff so there was no way for me to get Friday off too. Not anyone’s fault, but I was bummed. I think I’m just too used to Dragon Con. If there is a panel or celebrity that they know will be really popular there are usually repeats at some point over the weekend. I guess I’d been hoping for some of those panels to happen again on Saturday. No such luck. The other crappy thing was that my alarm had accidentally been set to silent so instead of waking up at 8:30am I awoke abruptly and panicking at 10:30am. I mean, how is that even an option? Why would anyone want a silent alarm? Like I said, it was a long week. No way I was making it to the Halloween panel at that rate.

I kicked myself out of bed, and got the hubs into the car to try and get some fun out of my day anyway. We met one Sharron and two Amys down at the Sheraton by 12:30pm. Not bad, all things considered. As we were in line to get our passes Sharron text me that they had walked out of the Halloween panel. Apparently you could hear the moderator, but the ladies were talking too softly for anyone to hear. As I had planned on recording that panel I guess I didn’t miss much after all. I’m not good enough with Audacity to amp up whispers to audible levels. While that was too bad, we were at least in perfect time to meet the girls and have a look around before deciding what to do next. We ran into a few more people, and took a look around the dealer room. I make several passes through the dealer room here. One: because I’ve gotten too claustrophobic to do the dealer room at Dragon Con anymore. 2: because there’s so much unique and creepy stuff to look at. I’ve only got so much money to spend, and I try keep from spending it too quickly. Some of the buttons on my con bag were getting old and kept falling off so I knew I wanted to look for a few new ones. Other than that my wallet was wide open (as open as I could afford for it to be anyway) for something else to strike my fancy. I thought about checking out the Scream panel, but Jay told us that Skeet Ulrich had canceled so it was just the guy who did the voice of Ghostface. Wandering seemed like more fun for a while.

We did go to the Edward Furlong panel, and that one was interesting. I’m not a huge fan or anything, but I remember him as a kid, and probably remember him more because he was close to my own age. I’m pretty sure he is anyway. Oh, shit he’s younger than me! Not by much, but still. He was in a James Cameron movie when he was 14. I’m in my 40’s and haven’t even been in the same neighborhood as James Cameron. Way to make me feel like a failure Furlong. He did have enough tough times that you can’t stay mad at him though. He doesn’t even remember some of the movies he’s done. I don’t want to spoil any of the panel though, so you’ll just have to come back next week to hear the rise and fall of Edward Furlong. Coming up next was a costume contest and a tattoo contest so we decided that it was time to go get some food. We grabbed lunch at the Metro Diner (which was the least crowded I had ever seen it), and saw tons of cops out on horseback getting ready for Superbowl crowd control. If Days of the Dead had happened one week later there is no way in hell I would have gone. Dragon Con sized crowds made up of football fans? No thanks. After that it was back to the Sheraton for a stroll through the celebrity room.

When I first went to Days of the Dead I had Keith David sign my copy of Mass Effect 3 because I’m a dork like that. Last year Terry got a signed pic from Ray Wise. This year there really wasn’t anyone we wanted autographs from that badly. We had briefly considered having P.J. Soles sign Terry’s copy of the Rock ‘N’ Roll High School soundtrack, but my mad dash from the house that morning saw us leave a few things behind that just weren’t important enough to go back for. It’s a damn good thing that I had my con bag packed the night before. I did at least want to take a look at everyone that was there. I didn’t get to see Linda Blair since she had such a huge line that she had to be put into her own room, but I did get to look at Chris Jericho. I was pretty into wrestling back in the late 90’s, and three of my favorites were there. Scott Hall, Kevin Nash, and Jericho. The first two weren’t youngsters back then and, although still large men I wouldn’t fuck with, they are getting on in years. As Jericho was younger I figured he’d still be in pretty good shape. Not gonna lie, I had a little crush on him back in the day. Despite being 20 years older it was still nice to get to see him up close.

The hubbo (I’ve really got to find him a new nickname) had reached his being around people limit by then so he headed home while I soldiered on with the girls. We were trying hard to make it until the bands played at 10pm. We decided to treat our Amys to a little con life. One of them had never been to a convention before, and the other was in town from Ashville and doesn’t get to visit often. We tried Trader Vics first, but it was too early. We then tried the Pulse bar at the Marriott, but that was still closed too. Well the bar at the Hilton was open at least so we went there while we waited for a few guys to meet up with us. Our con virgin Amy is exceedingly friendly, and she went around making friends with the older folks from the mayors convention being held there. They were from cities I’d never heard of, and thought all “those people walking around covered in blood” were crazy. After that Trader Vic’s was finally open so the other three ladies ordered flaming drinks while I stuck to a glass of wine. People drinking and setting things on fire just don’t mix for me (as evidenced by an Amy nearly setting herself and the table on fire). Then it was back to the Sheraton to take another stroll through the dealer room, spend some money, and see what else there was to be seen. Our friends from Theme Park Alchemy were there, but had sold out of the 999 candle I was interested in as well as my second choice of the Cunning candle (I’m a proud Slytherin after all). I ended up opting for a Butter Brew candle which smells deliciously like a certain copyrighted drink wizards enjoy. Still gonna have to get those other two sometime though. 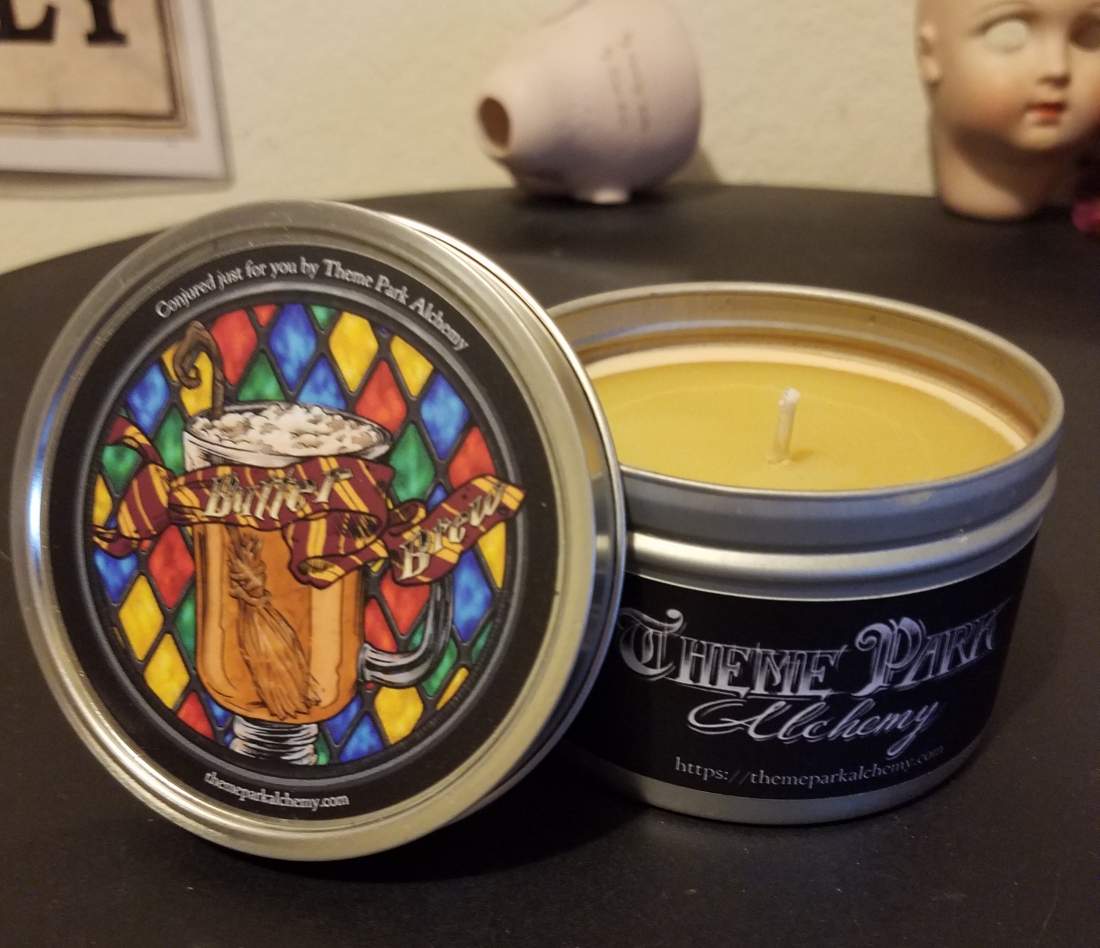 We caught the tail end of the “fx makeup showdown” which is the best part. The times that Sharron and I have gone to those things either here or at Dragon Con they’re not thrilling enough to sit through. You can definitely see why makeup fx contest show “Face Off” was heavily edited. Once that was over there was no more official programming until the bands went on. We tried, but we just couldn’t make it 3 hours without getting ourselves into trouble. Last year we went to dinner, and found some mischief to keep us occupied. This year not so much. So if you do go to Days of the Dead, and see The Casket Creatures and Elzig on the bill plan accordingly. They’re both definitely worth seeing.

It doesn’t sound like I did much this year, but I feel like I had a pretty full day. One thing I’d love to see happen is a shift in things like the costume or tattoo contest so that bigger panels could happen on Saturdays. Not everyone can take Friday off. Or maybe it’s time to expand. Those few rooms on the lobby level are getting pretty crowded. Let’s open it up onto the second floor, and start working towards a hotel takeover. That would also allow a shorter gap between the programming ending, and the bands starting. I know nothing about logistics of running a convention though so who am I to question? Nobody, that’s who. Days of the Dead is great fun for horror fans or even just convention fans. If you’ve never been to a convention at all it’s a great place to start. And remember to check back next week for the Edward Furlong panel.

One thought on “Days of the Dead – Atlanta”