I have to start by saying that this is not an action figure of John Phillip Law from Mario Bava’s Danger: Diabolik. It is based on the Italian Diabolik comic books that the movie adapted.

However, the movie was so well designed and Law was so perfectly cast that it doesn’t take a whole lot of squinting to convince oneself that this is a figure from the movie.

There aren’t many action figures that I’ve anticipated more than this one. I love Bava’s movie and like I said – this figure passes well enough. I never imagined in a million years we’d get Diabolik figures of any kind, let alone as part of the greatest action figure line of all time. Now that this figure is out, the obvious next step is One:12 figures of the Beastie Boys from the Body Movin’ video, right?

Pipe dreams aside, Danger: Diabolik is a singular film experience, rolling James Bond, Batman ’66, and the feel of classic Lucha Libre movies into one bonkers, visually stunning movie. In my opinion it’s Mario Bava at his best – bringing a cartoon world to life with little regard for the mundane trappings of reality. Add an absolutely killer soundtrack by the legendary Ennio Morricone on top of that and I feel like it’s one of the most criminally under-recognized films ever.

If you don’t know, Diabolik is a sort of anti-James Bond. He’s the best thief in the world who uses gadgets and an almost superhuman set of skills to take what he wants, whenever he wants.

As the movie poster states:

“Meet Diabolik, Slick, Suave, Gentle, Brutal, Wild. Out for all he can take, caress or get away with…”

I’m not gonna lie – I was a little nervous to open this one. I even put it off for a couple of weeks after I bought it. After years of anticipation and intervening (mostly) excellence from Mezco, it almost felt like I was too hyped for this one.

Did it live up to my expectations, or did it let me down (deep, deep down)? Read on and find out!

The Mezco slipcovers might be officially done. I suppose it depends on how long future releases have been cooking, but seeing as Diabolik was first announced three years ago I imagine this is a pretty good representation of the line’s packaging going forward.

This is fine by me. While the slipcovers were fancy, Mezco is keeping the outer boxes classy and maintaining the multiple trays within that keep the figures, stands, and accessories safe and secure. The box features Diabolik’s trademark eyes on the front, done in glossy inks on the matte black background.

The back is covered in action shots of the figure and a list of accessories.

I like that Mezco has maintained the general look of the One:12 packaging while trimming some of the unnecessary frills. 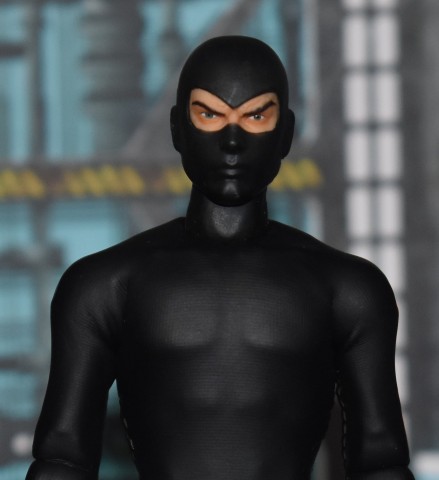 The base body is a fairly skinny one that I think is different from their comic Spider-Man. It’s loaded with the articulation that we’ve come to expect from the One:12 Collective. From the calves up the figure could achieve every pose I wanted while I was taking pictures. The ankles are good for a One:12 figure and fairly limited compared to other lines. I trust that someday Mezco will figure out how to have better range. I honestly can’t think of how without sacrificing aesthetics, which they definitely don’t want to do.

The default masked head is simple but excellent. The plastic matches the bodysuit almost perfectly. Diabolik’s exposed eyes and eyebrows match the source art perfectly, capturing the character’s devious nature. The left eyebrow is raised ever-so-slightly higher than the right. There’s an amazing amount of sculpted and painted detail in the relatively small portion of the character’s exposed face, giving it a lot of character for a guy in a mask.

In a weird way Diabolik’s matte, black bodysuit made him a little more fun to mess around with than some of the superheroes. It’s all a uniform material without detailed tampos to worry about. Not that I’ve ever had any issues posing the more intricate figures like Spidey or Daredevil, but I do always worry a bit about something cracking.

This figure is covered in a black bodysuit from the base of its neck to the bottoms of its ankles, with the sleeves ending under some very specialized gauntlets. Some of the seams – particularly those on the back – seem a little more noticeable than they are on other One:12s, but there’s no way around it and they don’t bother me. I mean, unless Diabolik is just coating himself with “Midnight Charcoal” Weatherbeater every night, he’s got seams, too. 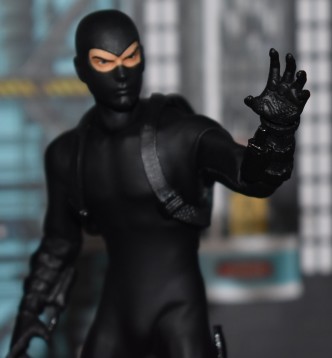 The gauntlets I mentioned are actually sheathes for Diabolik’s throwing knives. It’s a great design and an ingenious way to hide the openings of the sleeves. The knives fit snugly into place, though do be careful when sheathing them because they could get stuck a bit and possibly break with too much force. They’re sturdy, but they’re still tiny, thin pieces of plastic.

The hands aren’t just plain, black gloves because that wouldn’t be good enough for a One:12 Diabolik. The palms and insides of the fingers have grips and textures sculpted in. It’s wonderful detailing that adds so much to the figure.

Believe it or not, sneakers are a part of Diabolik’s costume. You might expect the onesie-type situation that most superheroes have, but this anti-hero is drawn with basically hi-tech running shoes. For the figure, Mezco chose some nifty-looking slip-ons with a great tread texture that extends up over the toes and heels, all the better for scaling buildings! They look slick and provide a natural seam for the bodysuit to end.

Even without the accessories this is a striking figure that’s tons of fun to play around with and pose. The texture of the suit catches light in interesting ways and makes every pose cool and mysterious.

The watch slides onto either of Diabolik’s wrists with the hand removed. It’s immaculately detailed and has a white dial that might give the thief away in the dead of night, but that adds a nice highlight to the figure. 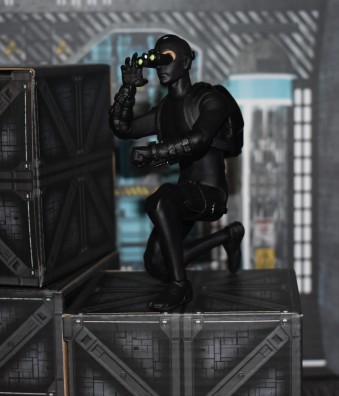 The night vision goggles – more of a headset, really – clip over the figure’s head and are surprisingly secure once there. The painted green lenses and little silver knob are applied precisely and are more of those special touches that make this line so great. Mass market versions of this item would likely be all black. And also not fit or stay on.

Mezco is pretty thoughtful about accessories. The figure only needs one combat knife and two throwing knives, but the set includes three and six, respectively. Losing or breaking these is an unpleasant thought, but a possibility and knowing that there are spares is a comfort. 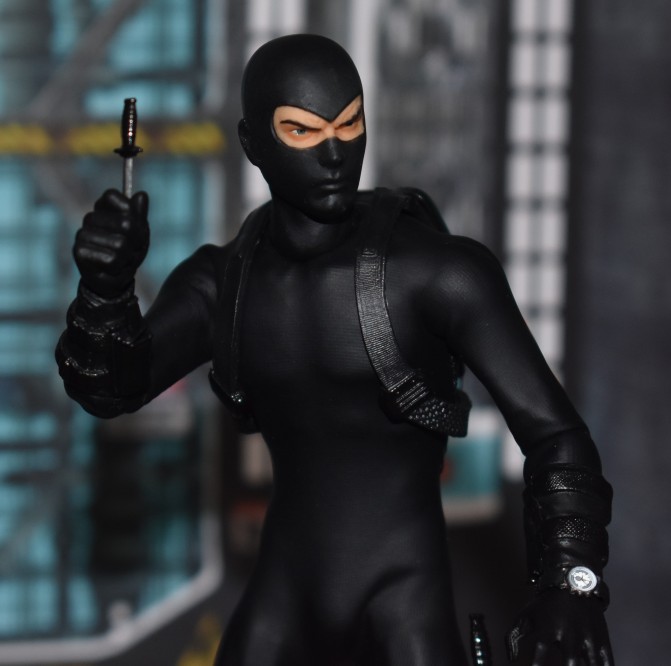 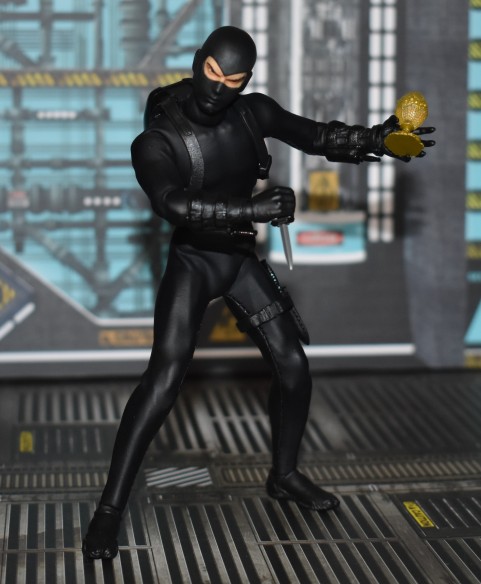 The knives themselves have detailed hilts and silver blades. They fit perfectly into their sheathes or the corresponding hands. Diabolik does not use firearms, so these are the perfect weapons for the figure.

The “Imperial Egg” is likely one of the most commonly known items for thievery. From James Bond to Batman ’66, every child knows that fancy jeweled eggs are among the most desirable valuables on the planet. This one is translucent gold plastic with a painted gold base. It would be neat if it had some more color, but I assume it depicts a very specific item from the comics.

The diamond has amazing clarity for a plastic item and, well, looks like a diamond. The figure doesn’t really have a hand that’s quite right for holding it, though, which is a little disappointing. 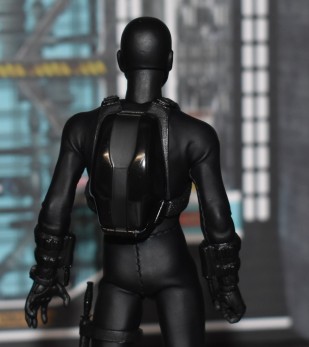 Diabolik’s backpack is a very modern piece with a hard shell exterior and a hinged bottom. The straps slide up over the figure’s arms and onto its torso where it fits perfectly. The different glosses of black on the straps, case, and shell highlights look great and make a plain black item look exciting. Both the diamond and the egg can fit inside. 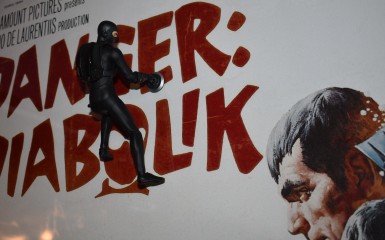 The suction cup climbers look excellent, right down to the sculpted release buttons on the side of either handle. The figure can hold them well, with the handles fitting snugly into the open fist hands. As far as functionality, though, these are mostly for looks. While they do feature actual rubber suction cups, they don’t suction to surfaces very well. I tried my computer monitor and the acrylic over my Danger: Diabolik movie poster and they only stay mounted for a minute or so before losing suction and sending poor Diabolik plummeting to his doom. I even gave ‘em a lick like you had to with suction cups when you were a kid and that didn’t make much difference. 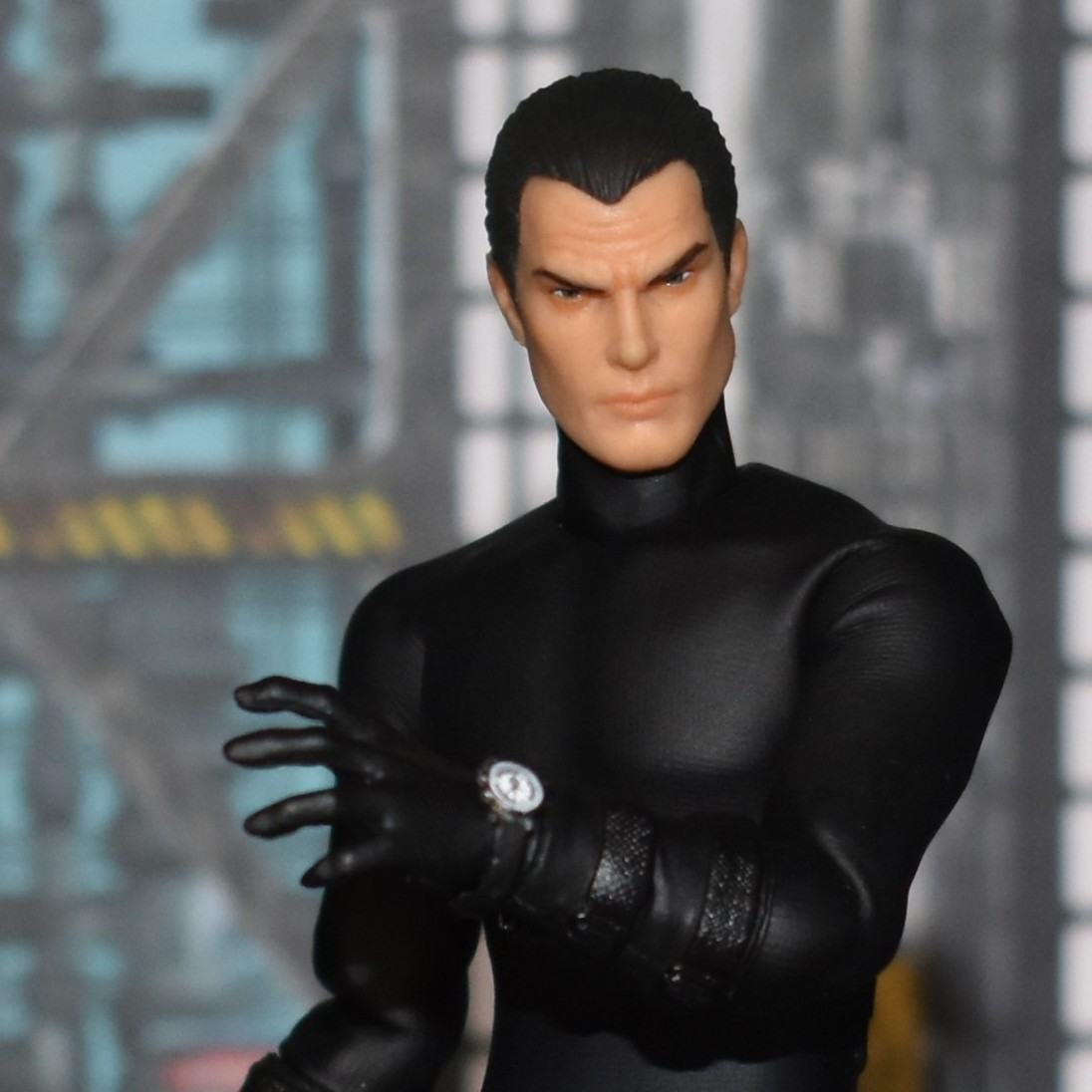 As I mentioned above, the alternate head could pass for John Phillip Law if you squint enough, though I could see a bit of Christian Bale there, too. And I have to say, I think he’d make a better Diabolik than he did a Batman.

The heads switch out easily and stay securely attached.

The stand is the Mezco One:12 standard complete with armature. 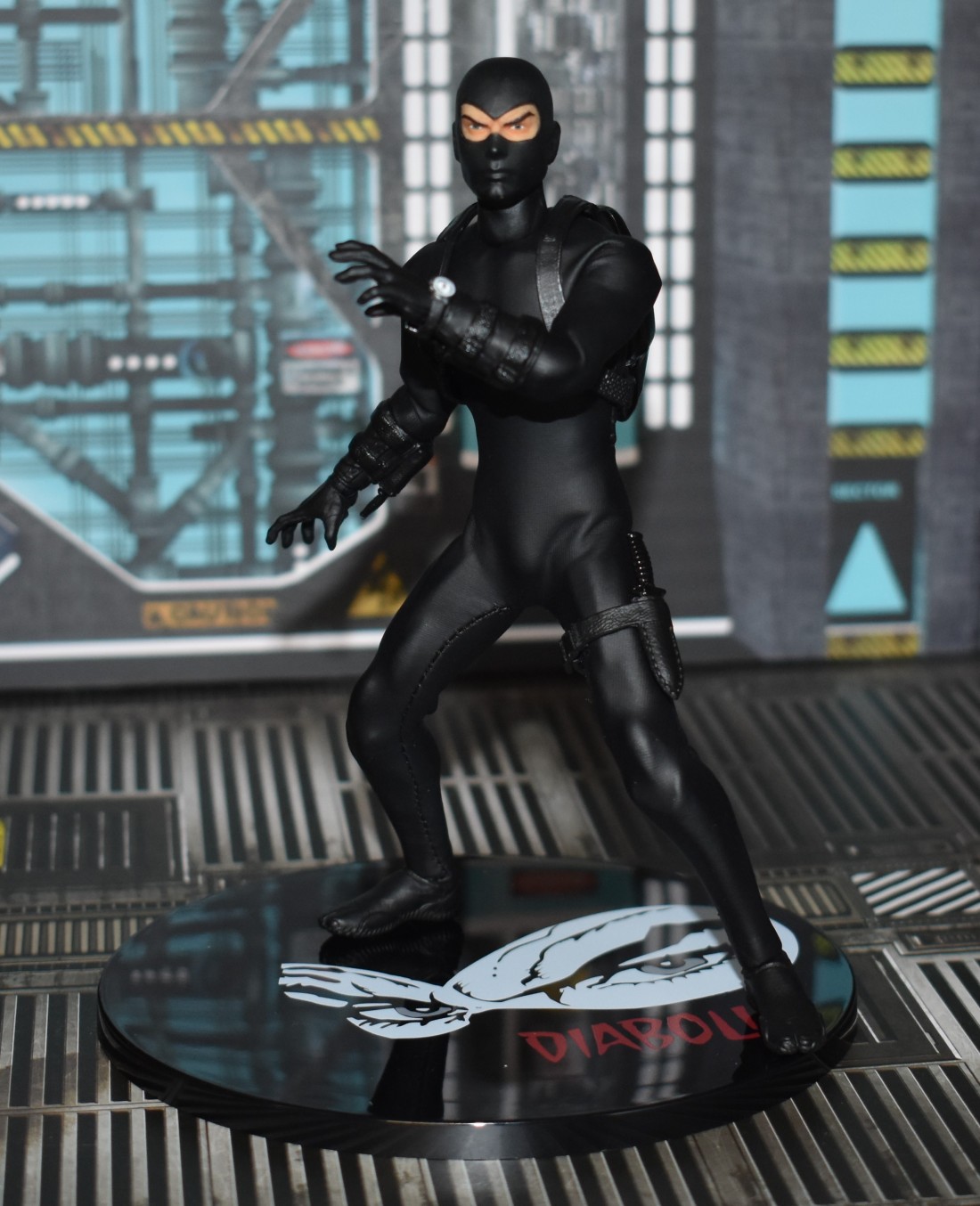 This is now my favorite action figure in my collection. After years of waiting, not only did Mezco get the job done, they exceeded my expectations. It’s perfect and I almost want to buy another one just to keep in a safe. Just in case.

Even if you’re not familiar with Diabolik, this would be a great addition to your collection. After all, don’t your superheroes need a master thief to pursue?