There have been some changes to my collecting habits since I reviewed Mattel’s Ultimate Edition Ultimate Warrior.

I’m pretty sure you collectors will be able to identify with this.

I was doing my best to just collect Mattel’s Retros, female Elites, and Mattel WCW figures, with the occasional clearance or markdown figure here and there – just figures I could get for ten bucks or less. Despite some pretty big temptations I have been sticking to that.

Of course, the tremendous Major Wrestling Figure Podcast has not helped my resolve to minimize my wrestling figure collection. But overall I’ve been strong.

Then this Walmart (ugh) exclusive figure of the Jabroni-beatin’, pie-eatin’, most electrifying Superstar in the history of sports entertainment came along and it looked so damn good that I couldn’t help but start looking for it.

This Rock was released alongside a set of WWE/Ghostbusters crossover figures that, aside from their hilariously tiny proton packs are pretty good but not for me. The Ghostbusters seemed timed to coincide with Halloween, while the SmackDown-branded Rock might have been conveniently aligned with the brand’s debut on the FOX network.

Whatever the case, the things aren’t showing up in Georgia. In the frequent and relatively wide-ranging toy hunting I do I have found them exactly once. There were two Rock figures and three of the four Ghostbusters and that was the only time I have seen them. If I had to bet, I’d put money on these figures showing up in massive quantities at discount stores like Ollie’s and Big Lots, possibly before the end of the year but definitely by February.

The best part is that the Ghostbusters/Rock combo wave is shipping in its own display that mounts on the side of an endcap. The ones I found were just on the pegs and I have never even seen one of the endcap displays in person. Not even an empty one.

Fortunately, though, I got my Rock. I hate Walmart exclusives because they are the absolute worst retailer on the planet and put zero effort into featuring or emphasizing any exclusives they might get. And because they are by default the biggest toy retailer in America toy manufacturers are all too eager to cut exclusive deals with them because they then have a guaranteed purchase in massive numbers. Once the deal is done it doesn’t matter what Walmart does with the product.

Pardon my cynicism, but I’ve been playing this game for decades and my stomach drops every time an exclusive I want is announced for Walmart.

So was this Rock worth the hunt or should I have just waited for this one to FINALLY… show up… in TJ Maxx? Read on and find out! 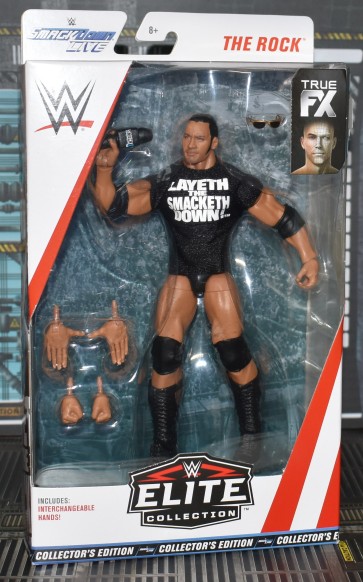 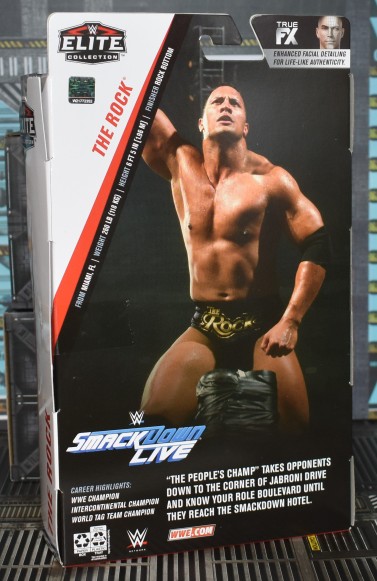 The Brahma Bull comes in a standard-shaped Elite box, but with some special livery to denote the exclusivity – a “Collector’s Edition” banner around the bottom and a “SmackDown Live” logo on the top left corner where the series number usually sits.

The figure and accessories are arranged in a nice, visible manner in the interior tray.

The back of the box features a pic of the Great One up on the turnbuckles in one of his signature poses. I appreciate all of the information that Mattel has been putting on their cardbacks. There’s a sort of bio/tagline at the bottom and some stats beside the picture. To me these are all nice little details that I would have loved having when I was a kid. File cards were a huge deal back then and I would memorize the stats of all of my favorite characters.

While I’m a fan of the Elite box and appreciate that there are some tiny distinctions made on exclusives such as this, I think Mattel could’ve gone even further. I’m not saying they needed to produce a Brahma Bull-shaped box or anything like that, but making these blue rather than white or changing up the overall graphic design would go a long way toward making them feel more special and making them more eye-catching on the pegs.

Although the point might be for customers to dig through all of the other figures to find these and perhaps notice something they otherwise wouldn’t have bought. 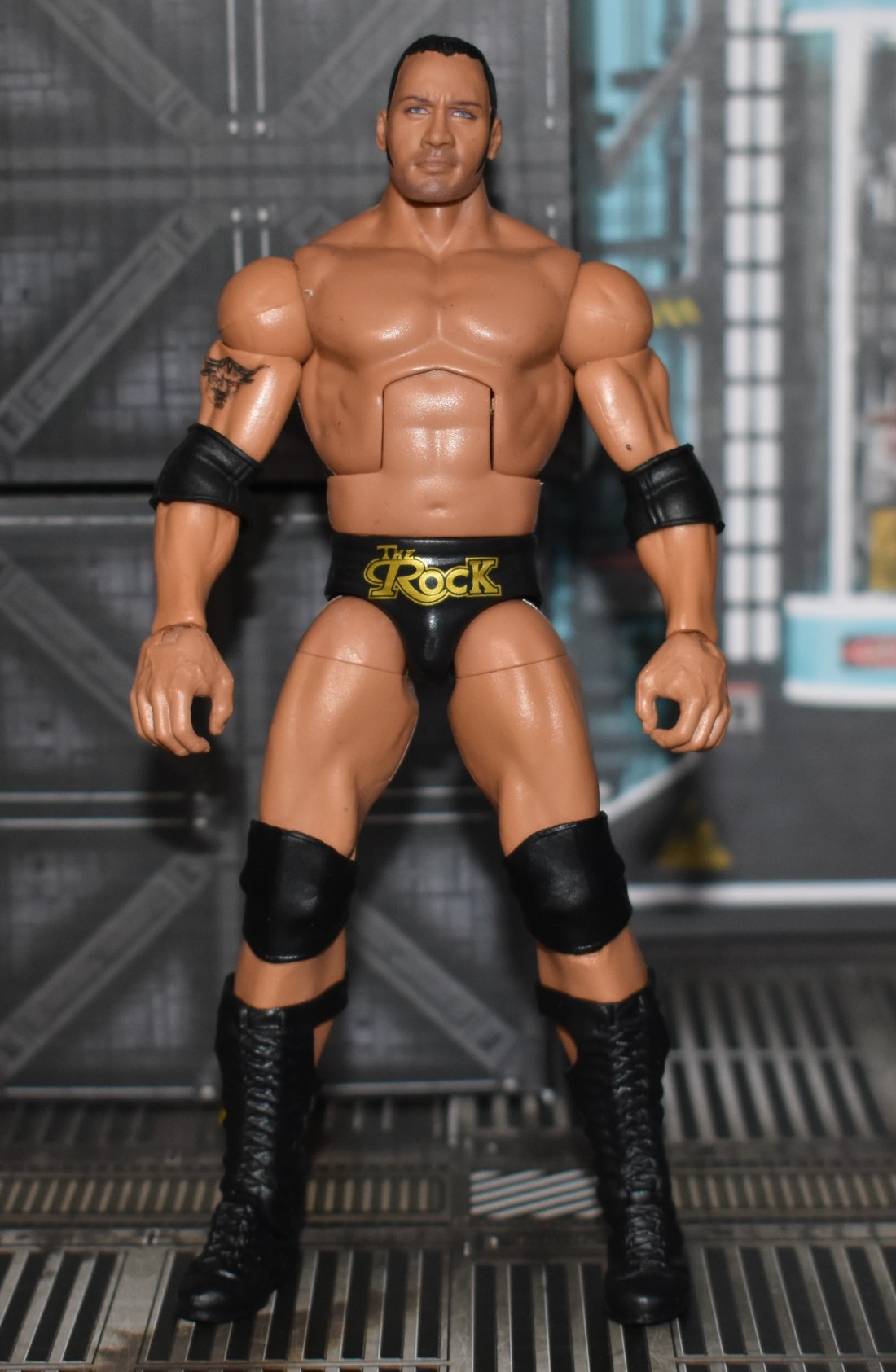 We’re getting to the point where some of Mattel’s better likenesses are almost achieving an uncanny valley effect. The sculpts have been good for a long time, but the new printing method for facial features has taken these to a whole new level, so that when the sculpt and deco are good enough, it basically looks like a tiny human head.

That’s the case with this figure. While I wouldn’t say it’s a perfect likeness, it looks so realistic and is so easily recognizable as a younger Dwayne Johnson that it’s a little creepy to look at.

The only super-minor issue I have is that Rock’s ridiculous, glorious sideburns are all paint and no textured sculpt. This is better than no sideburns, as that would have made the figure inaccurate, but when you get up close they look weird. On the shelf, however, you’ll never think about it. There’s also a faint dusting of stubble, which I would qualify as “not wrong”. We don’t typically think of Rock as being stubbly – not like HBK – but he was from time to time and to me it helps the face achieve a more realistic likeness. 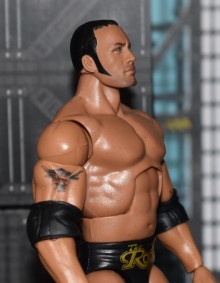 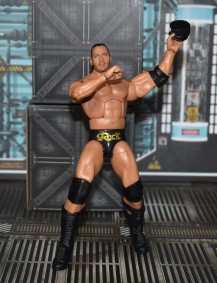 Rock’s skin tone is good and most of the exposed skin has the very slight texture that gives it a nice, realistic look that isn’t as plastic-y as most toys. I am sill baffled by the lack of nipples on these figures, especially when there are nipples right there on the box.

The brahma bull tattoo on Rock’s right bicep is nicely done. It’s well-defined, but printed lightly so as to look like an actual tattoo and not body paint or something. As more and more Superstars have gotten ink over the years this is something Mattel has had to perfect, and I think they’ve pretty much got it down.

Rock’s trunks have “The Rock” on the front and the brahma bull on the back, all in gold. It looks good and is probably the best “default” design and color you could go with.

The figure has the rubbery knee and elbow pads that are standard for these now. For a long time I hated them and wished they were sculpted on so as not to interfere with posing, but I have to say that between the softness of the plastic and the mobility of the pieces they don’t interfere with posing as much as I used to think. And if they were part of the sculpt there would be two negative elements – 1) fewer figures would be able to share tooling and that would reduce the number of unique Superstars Mattel would produce, and 2) when the figures were posed you’d get a weird look where the pads end up looking longer or wider than they should. It’s hard to explain, but if you visualize the way an action figure joint works and put a pad around it, you end up with a really long knee pad when it’s bent.

Speaking of bent joints, the body type used is just right and has the standard Elite articulation. This means that you can achieve pretty much all of Rock’s taunt poses and most of his moves, Sharpshooter aside. And who wants to pose the Rock doing his terrible Sharpshooter, anyway?

Finally, Rock’s boots are correct. On the one hand, of course his unique boots should be correct. Those open-calf boots are a huge aspect of Rock’s look and even if you’re not conscious of it, you’d know a figure looked weird if that detail was wrong. But I still give Mattel credit for getting it right because there are plenty of Rock figures that didn’t. 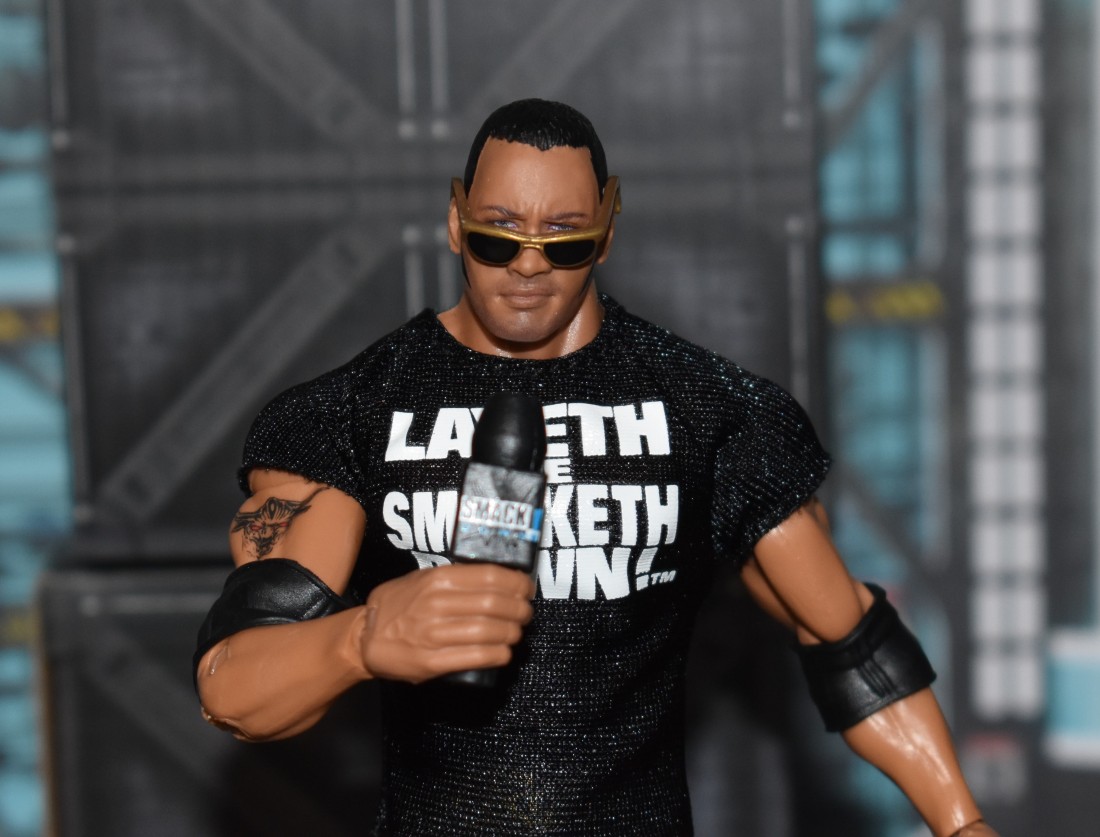 The Rock comes with a microphone, sunglasses, a removable shirt, and four extra hands. In my new ongoing trend of forgetting to take specific pictures, this time I forgot to get my usual pic of just the accessories. I chalk this one up to my sheer excitement to get this figure out and mess around with it. Fortunately you can look at the box pic and the pictures I took of them in use.

The microphone has the old SmackDown logo on it, which is fantastic. Toy companies haven’t always been the best about getting era-specific logos right, often putting out product that was seemingly “good enough”. This, to me, is a win. It fits perfectly into the figure’s hand and doesn’t feel overly bulky like a lot of hand-held wrestling accessories do.

The sunglasses are a bit thick, but have gold frames and black lenses and look pretty nice. The only real solution if you want a figure to have sunglasses and look really good is to include an alternate head with sunglasses sculpted on, and then you couldn’t pose them like I did. They’re toys, people. Sometimes we have to deal with these minor scale issues.

The shirt fits the figure perfectly. It has a Velcro closure on the back that isn’t hugely visible. You’ll have to decide if you want to display Rocky with the shirt on or not, as historically these black soft goods might stain your figure.

The extra hands all look great and swap out easily. Apparently some customers have ended up with hands where the flesh tone doesn’t match the rest of the figure, but fortunately mine doesn’t have that issue.

I do wish Mattel would have produced a hand with hinges at the top knuckles so that the figure could fully execute Rock’s “just bring it” taunt. I like the open palms included here, but Rock bands his hand at the fingers, not the wrist when doing that taunt. It’s not a big deal by any means and doesn’t affect my overall enjoyment of the figure.

For whatever reason, Walmart is pricing Elites at $15.88 right now. This Rock is worth the standard $19.99 easily, but if you actually do see one in the wild I recommend it. Apparently cases with Rock and the WWE Ghostbusters have shown up in other parts of the country – mostly the Northeast and Florida – so keep an eye out!

If you smelllllllllllll what Needless Things… is cookin’!