Someone at work was trying to talk to me about this year’s Oprah’s Favorite Things list and using it to do their holiday shopping. I could not make her understand how much I don’t care what Oprah does or doesn’t like. I’m a nerd and I don’t need whatever throw blanket or lounge pajamas she likes this year. Or any year for that matter. I checked around for lists of gifts for nerds, but most of those had too much un-fun tech stuff. I kind of want a robot vacuum, but I definitely don’t want one for Christmas. I decided to put my own geeky list together for anyone who needs help picking out a present for their favorite dork. Okay so this is a list of things that I really want for myself, but I think a lot of this stuff is universal. I’m not getting paid to advertise anything here. I just included links in case any of these goodies strike your fancy.

Wish has everything you could ever want. Quite literally. You’ve probably had some bizarre stuff pop up on your facebook feed (god knows I have), but if you go into the app and actually do a search you can find some cool stuff. My “con bag” is covered in pins I got off there, and most of them were under a dollar. Of course shipping was $2 to $3, but still cheaper than I’d have gotten from Amazon even with free shipping. The Skeletor Live, Laugh, Love pin I’ve seen on Etsy for $6.37 was $2.72 on Wish including shipping. I’ve compared a few items to stuff on Amazon, and a lot of it seems to be the same merchandise. Well, except for clothes. Be super duper careful to read the size charts if you’re going to order clothes. A female large here is often a 3x or more in Asian sizing. You do get to save a shit ton of money since you’re getting it directly from China (or other nearby Asian country), but you also have to be patient with delivery times. At this point you probably can’t get something in time for Christmas unless you pay for expedited shipping. If you’re hard up for something unique though this No Face from Spirited Away lamp is a great choice for your anime loving friend. I have one on my Wish wishlist, and will eventually get one for myself or that girl I work with who is obsessed with Miyazaki films.

I may not have seen The Mandalorian yet (I told you guys I’m waiting until it’s all released), but I have eyes and a heart that instantly melted for Baby Yoda. I don’t care if Disney is calling him The Child; he’s Baby Yoda and he makes Porgs look like Gamoreans. I’ve seen the Funko Pop, and that’s okay I guess. Better than that would be something big and soft enough to cuddle. A plush doll of this cute little guy would make any Star Wars fan (or person with a soul) fall into your arms. The falling will have to wait a little bit since he’s only up for pre-order from the Disney website right now, but don’t let that stop you. If you give someone a card with a picture and order information I’m sure you’ll get pretty close to the same reaction. Love him forever you will. 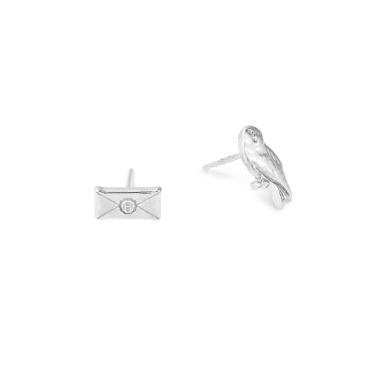 Maybe you know some weirdo who doesn’t like Star Wars, and is a little more uppity about their fandom. For the classy Potterhead Alex and Ani has a line of Harry Potter jewelry. I’m not a fan of their bracelets because I don’t like all those charms clinking around when I move my arm. I talk with my hands so this would happen to me a lot. Their website also features several necklaces, rings, and earrings to choose from. I like these more subtle Owl Post earrings. Unlike the jewelry Hot Topic has for sale these are sterling silver so no one will have to worry about their ears turning green. If you like cute nerdy jewelry, and earlobe retention it’s a win/win.

Speaking of Hot Topic: they have lines of just about anything you could be into. Anime, Harry Potter, Marvel, Star Wars, video games, and lots more. I’m a fan of their A Nightmare Before Christmas products. I’ve always considered it a Halloween movie, but enough people disagree that they have some colder weather items for sale just in time for Christmas. I was recently picking up some vitamins at Walmart (only reason I go there is that drugs are so damn cheap), and ran across a sweater covered in skulls. I immediately bought one because a cold goth heart still beats inside me. While it’s fine, I’d rather have this one from Hot Topic with Jack Skellington’s skull on it. Thanks to their weird website I couldn’t save an actual picture, but you get the idea from the screenshot.

I keep seeing Instant Pot recipes, and I’m intrigued. I have a crock-pot, but slow cooking is only good for people who know when they’re going to get home every day. I’ve started something at 7am only to get stuck at work late or hit bad traffic to find a pot of mush waiting for me at home. I like cooking, but making it faster to do would help me do it more often. Williams-Sonoma is getting in on the Star Wars hype too by selling a line of Le Creuset bake-ware, Instant Pots, and accessories like trivets and spatulas for the geek cook. While I wouldn’t turn down the ridiculously expensive covered roasting pan ($450, but it’s 5 1/2 quarts of cast iron goodness) that looks like Han Solo frozen in carbonite what I’m really interested in is the R2D2 Instant Pot. If you’re not into Artoo they also have Chewbacca, Darth Vader, and more. Even if I don’t shell out for the fancy Star Wars version I may need to get myself an off brand cooker. No one can stop me from stealing the BB-8 shrimp pasta recipe, but it probably would taste better cooked in his body.

Did you know that EB Games is still around? I sure didn’t. I can’t remember the last time I saw an actual store, but their online business is still going. For the gamer in your life consider this Fallout Pip-Boy 2000 kit. I saw junky plastic Pip-Boys for sale when Fallout 4 came out, but this thing looks legit. Building stuff is fun, and building nerdy stuff even more so. I’m never going to be a Lego person (nothing against those who are. It’s just not my thing), but this is some construction I could get behind. Give me a bottle of Nuka-Cola and let me loose on that kit. I suppose this only works as a great gift if the gamer in your life loves Fallout. But if they don’t are you even sure you want to be friends? I’m kidding. It’s one of my favorite game series, but in my long ass life I’ve learned to be disagreed with.

Another thing that’s still a thing is Game Stop. A lot of people hate them, and generally with good reason. After taking over Think Geek they aren’t going away anytime soon though. The last time I walked by one of their stores it looked like a Spencer’s or Hot Topic with better lighting and video games. Love them or hate them they’ve got some good geek gear. Check out the neat Fizzgig puppet. Whether you like The Dark Crystal, puppets, or cute things with lots of teeth it’s hard to be mad at this little guy. What better way to up your next Dragon Con cosplay than by having him growl at everyone who gets in your way? Or he could just hold your beer. The possibilities are, well not endless, but at least numerous. I would also have the added benefit of being able to freak out my husband if he annoys me. Or maybe I could finally cure him of his fear of just about anything that’s ever come out of Jim Henson’s Creature Shop.

I know there’s a lot of Star War on this list, but there’s a lot of Star Wars in general right now. I think I’ve also made it pretty damn clear by now that I love Star Wars. Once this new movie comes out you haters will get a little break. Until then, suck it up jerks! I saw the Jedi Challenges AR dealie (the official name is too damn long) when it first came out, and I almost peed myself. Alright that’s an exaggeration, but come on. Finally a chance to live out my nerdiest dreams! It doesn’t require a new console or extra hardware on a PC, but it does only do Star Wars things. As cool as it looked the price seemed a little high just to swing a lightsaber around for a few hours a week. I kind of wanted to wait and see what else would come out to compete with it, and the Oculus has indeed tried. Here’s the main difference: the Oculus game has no lightsaber. Sure you can force push which is cool and all, but I want to swing a lightsaber around without breaking anything in my rather small living room. There was “an incident” when I got my first Force FX lightsaber. The price has been slowly coming down on this, and it might just be time to bite the bullet. If I do get one don’t expect to be invited over to play. I will only play this when I’m home alone. With the curtains closed. I’ll probably lock the cats in another room too. They already look like they’re judging me without watching me wield a lightsaber like the clumsy dork I am.

So there you have it, 8 presents for that special nerd in your life. Better hurry though. Only a few weeks left to get your shopping done, and even less time to order online. This is why I start my shopping in late September/early October. Plenty of time for things to arrive from China, and I’m a fan of spacing my spending out over a few months. Plus I’m done before assholes who think they’re making good small talk can start asking me if I’ve finished my Christmas shopping yet. If you’re a procrastinator it might be the best time ever to get a month of Amazon Prime. I guess you could go to a store, but that just sounds terrible. You can tell I’m in retail huh?