We’ve all got Star Wars fever right now. I kind of have it all the time if I’m honest. Despite the initial bad reviews of The Rise of Skywalker I’m all in. It’s just that my life in retail hell won’t allow me to see the movie this weekend. I hope to see it sometime next week, but who knows. Until after New Year’s Day my schedule sucks. So I won’t be on the podcast Dave, Chad, Arian, and Schweck are recording this weekend. I take comfort in the fact that we will be able to start recording our podcast about Star Wars books shortly after the new year starts though. In the meantime, to help you all get even more hyped for the new movie I’ve complied a list of the best Star Wars games I’ve played. Not the best of all time, but the best I’ve played. Some of these were arcade only, some are from rather old consoles, but don’t let that stop you from picking up any Star Wars game that makes you happy to kill some time. 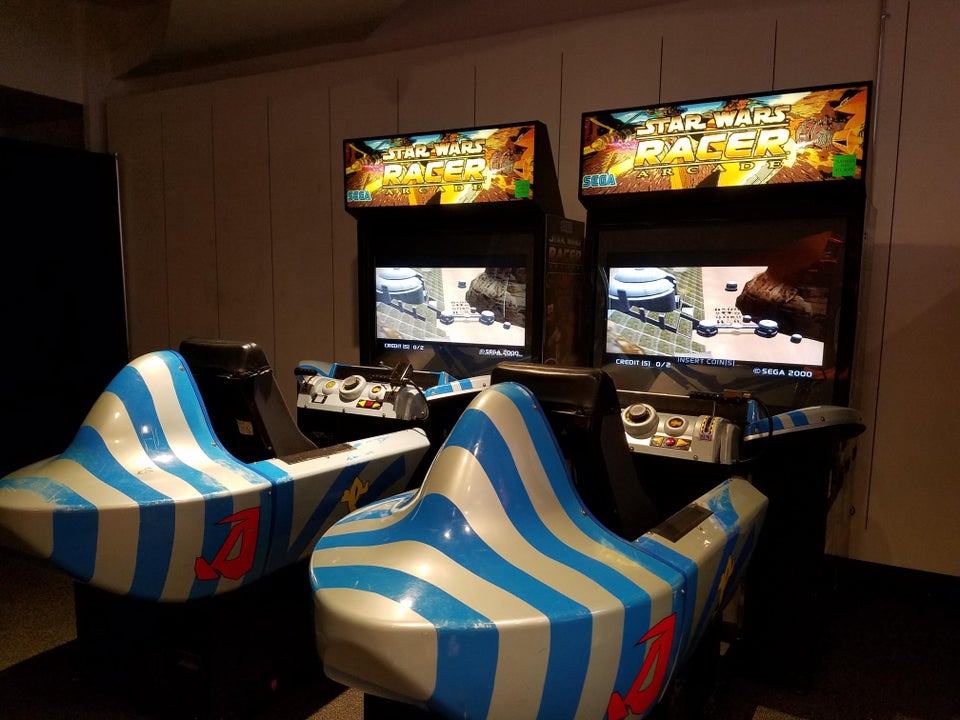 Maybe you played the Nintendo version at home, but nothing compared to playing this in the arcade. Well, not really an arcade because I played it at Dave and Busters. When it came out it was one of the only games I would play. We used to spend a lot of time at Dave and Busters with our friends, and the great thing about this game was the ability to play against another person. There’s no story, and there isn’t anything to do besides race, but that’s all you really needed. There are only four tracks (two of which take place on Tatooine), but it’s plenty to keep your short attention span going. My favorite was the track on Malastare because it was hard, but not quite as hard as the Boonta Eve Classic track. Also, it was nice to get the hell off Tatooine once in a while. I usually did pretty well at this game, and was often told that owning the Nintendo podracing game gave me an unfair advantage. Not true because the way you play is completely different. You sit in a chair designed to look like a pod, and play with controls very similar to how they look in Episode One. I don’t know where these old machines ended up when they were taken out of Dave and Busters, but fingers crossed they’ll be coming to the Dragon Con game room soon.

Another Dave and Busters classic. I used to tell Mr. Husband that we weren’t allowed to leave Dave and Busters until I had blown up the Death Star. On a really good night (meaning one where I hadn’t had 10 beers while waiting for the game to be free) I could get through all three Yavin missions with enough life left take on the Hoth stages. If the ASPCA ever comes after me for all the Wampas I’ve killed there’s going to be hell to pay. I usually lost a few lives in this part of the game which left me sorely weakened when having to face the boss battle with Boba Fett. It was hard because the controls were not well designed for handling a lightsaber, and you weren’t just trying to hit Boba Fett, but rather deflecting his blaster fire back at him. I got killed many times during this part. The few times I did get by I almost always wiped out during the speeder bike chase on Endor. Shit just moves too fast, and even when I’m not drinking I don’t have Jedi reflexes. If you’re good enough (or pay to keep going enough) you’ll eventually face the final boss battle of the game. A lightsaber duel with Darth Vader. I only beat him once out of the many times I played, but I sure would like to try again – maybe also at Dragon Con next year.

Like the arcade games above there isn’t too much story to Rogue Squadron. There’s a bit of story, and since it isn’t directly taken from the movies I guess that’s kind of a win. What it does have is hours and hours of flying fun. Have you ever wanted to know the difference between how a A-Wing, B-Wing, and X-Wing handle? Rogue Squadron had you covered. Get good enough, and you could even unlock a TIE fighter and the Millennium Falcon. I’m no fan of the Empire, but that TIE fighter sure was fun to fly. Honestly the only negative I could think of for this game was the “protect” missions. I’ve always hated babysitting missions, but that’s a minor gripe. If you had the N64 expansion pack this game looked really good for the time. Yeah you’ve got to go to Tatooine again, but you can also visit Corellia, Sullust, and Mon Calamari. And once you earn medals to unlock different ships you can go back to these worlds with the ship you like (and fit the mission) best. I’ve still got an N64 (mostly for Goldeneye), but I bet I can track down a copy of this old gem on the cheap.

And finally I’ve gotten to a game you don’t have to leave your house or dust off some old console to play. The Force Unleashed is backwards compatible for the new upgraded consoles. It may not look as good as it did when it first came out, but at the time it was a revelation to Star Wars gaming. It had a strong plot (made even stronger if you read the book), was beautiful to look at, and let you force choke the shit out of people to your hearts content. Sure there were problems. Aiming your powers at the thing you wanted to throw was deeply frustrating, I always kind of felt like dick for killing Wookies in the opening scene, and the game play did eventually get a little repetitive. But for all of its flaws I had never played a Star Wars game that was this fun and engaging before. Sam Witwer looked and sounded fantastic as the Sith apprentice Starkiller, and his murderous droid PROXY was funny in a way that the “roger roger” battle droids of the Trade Federation army never could be. The Force Unleashed II brought too much more of the same without any real advancements for me to like it as much as the first so it just didn’t make the cut. I am ready to go back and play this again now though. 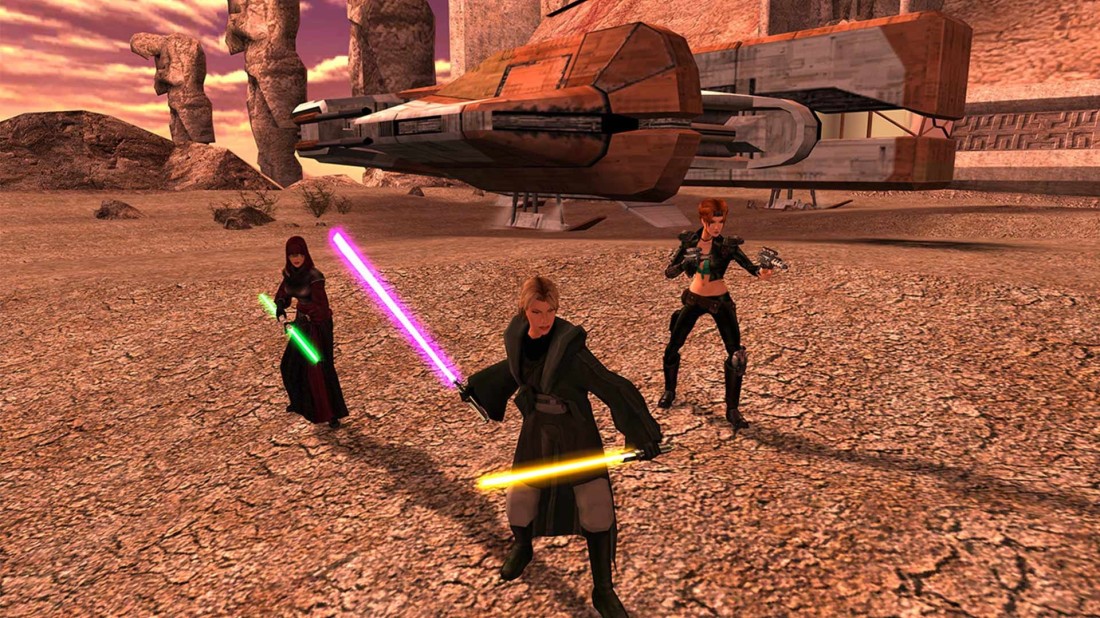 #1 – Knights of the Old Republic

Once upon a time I didn’t play RPG’s. It feels weird to say that know considering that my game-play is split 50/50 between shooters and RPG’s, but that was indeed true at the time KotOR came out. I actually didn’t play it until 3 or 4 years ago when I got it for free on Amazon for my Kindle. I enjoyed it so much that I was kind of heartbroken when I ran out of space and had to delete it to make room. I got a new Kindle with tons more storage this year, but the free-ness of the game didn’t transfer over. I think I can bite the bullet and pay $10 to get it again. Do you want to be a light, dark, or gray Jedi? KotOR let’s you choose. It was the first time I’d gotten to see what happened a really really long ass time ago in a galaxy far far away. There are a few glitches here and there, but it’s totally worth it for the story. Why? Because it was made by Bioware. They know everything about making a compelling story. If the people who brought you Mass Effect and Dragon Age can’t get you into a game then there’s just something wrong. Word had it a movie is in development. If they can put it out at any time other than Christmas I’m there for opening weekend.

So have fun seeing the new movie this weekend safe in the knowledge that I’ll be getting yelled at by some jerk who can’t understand why we’re sold out of something less than a week before Christmas. I have got to find a new career.